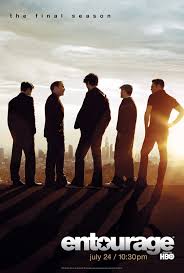 HBO’s “Entourage” has been one of those shows I’ve always been loyal to, even when the content didn’t deserve that loyalty. Watching from the very beginning, you become close to the characters (no matter how the writers are flubbing them), and you always want to check in and see how their lives are progressing. Last seasons “Entourage” pretty much took every characters growth over the 7 seasons and forgot about it. Turtle seemed to be stuck in the same “I want to do something BIG but don’t know what” rut he was in during season 6, did the writers forget about him going to business school? Main character Vinnie was stuck in the same rebellious nature that nearly ruined him in Season 5, but almost really ruined him in the season finale. Ari’s wife was having similar “you don’t spend enough time at home” complaints that she seemed to get over the season prior. It just seemed like everybody was back at one, and everything they had learned and grew from the entire series run was out the window.

Overall last season left a horrible taste in most fans mouths, feeling that the writers dropped the ball and gave us what felt like recycled plot points for the guys, or just totally abandoned the idea of giving certain characters anything interesting to do. The season was a big mess, ending in a very uncharacteristic raging out from Vinnie and a jail stay for cocaine possession.

When this Final season began a few weeks back, it seemed that the writers were still not as familiar with their characters as the viewers were. The beginning was a continuation of the big mess. Turtle, bought out of his stock in the Tequila he randomly got into last season, is back to “I want to do something but don’t know what” (seems like he would just re-ignite his limo business he had to quit for lack of funds). Eric and Sloane were back on the “maybe we love each other, maybe we don’t” kick, and Vinnie went back to being “Mr. Enlightened” after his Rehab stay. In the past three episodes, there was no real indication that the show was going to get back to what made it great.

Until last night, which managed to be a great episode by getting back to basics. The episode had all of our buddies working together toward a common goal, making sure Vinnie’s piss was clean for a drug test. Though it was a simple plot, there was some great humor, and even some heart with Vinnie and E finally figuring out their issues that have been present since the middle of last season. And all the actors were in top form, Drama brought some great one-liners, and Ari’s hilariously sneaky ways came back after him being depressed over his separation for most of this season.

The best thing was there was just great ensemble work last night, everybody complimented each other and showed how great the show is when they are all working as a team. Even Scott Caan, Eric’s partner at his Agency, has become a great new member. Him and his apple add a nice spark to the group dynamic, as well as the Billy Walsh character (played by Rhys Coiro) whose kooky sober ways have been a good asset to the show the past two seasons actually.

Is it too early to tell if this is enough to save this season? It could go either way, even the really bad seasons have a few funny lighthearted episodes before the show gets bogged down in trying to be too serious. This final season could end up being like season 6, which dragged until the third or fourth episode and ended up being on of the best seasons yet. Or the writers could write themselves into a wall again, but you’d hope that they have something good cooked up for the end of the series and the possible film spinoff.

I think if they surprise us with something, something that relates to the character development over the years, they could end on a great note. Although I fear they might end of a very cliched note (I can already envision Eric’s plea for Sloane to not get on the plane to NYC), with all the characters getting predictable happy endings. Which, wouldn’t be so terrible to see these people we’ve grown to love get what they want… even though they’ve kind of been getting everything they want for the past 8 seasons!?