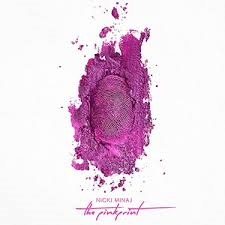 I can’t believe I’m about to make the next two statements.

– I listened to Nicki Minaj’s new album “The Pinkprint”

If you follow my blog, you’ll know that I’m not the biggest Nicki Minaj fan. But the powers of Beyoncé got me interested in Minaj’s 3rd official album “The Pinkprint”, which is released tomorrow. The Nicki Bey collab “Feeling Myself” is fun, full of attitude and swag, and surprise surprise… Beyoncé didn’t steal Nicki’s shine, in fact I feel like Nicki’s rapping and singing on the song made Beyoncé unnecessary. I was so impressed with Minaj on this song that it made me curious about the rest of the album.

And yes, I am very impressed with “The Pinkprint”. Not to say that this is the best album of the year or anything, there are definitely flaws, but overall I feel Minaj took her time to put together a really nice piece of work that flows well together and displays a new side of the controversial rapper. “Pinkprint” shows Minaj in a more vulnerable and mature state for whatever reason. Maybe she’s heartbroken or maybe she feels a need to prove herself, whatever it is that affected her during these sessions was a good thing because I’m very much into the vibe and tone of everything on this outing. Her lyrics are a lot more thoughtful, her flows are better, and even her singing has taken a notch up. She is definitely trying to improve on her artistry, which is a far cry from her last album.

That “Roman Reloaded” album from 2012 seemed incredibly rushed and only focused on broadening her demographic. Which resulted in an album full of silly and redundant lyrics matched with run of the mill production. The fact that the quality of her music was going down while her ego was inflating -I gave up on Nicki. With “Pinkprint” it seems she has re-gained the urgency to do something creative and personal, and I’m here for that.

She opens the album with three very emotional and personal cuts where she talks about love and loss over moody tracks. All three songs are quite lovely and set the tone for this new toned down Nicki. The rest of the album has it’s highs and lows, but flows from genre to genre in a much more seamless flow than before. There’s dance cuts (“The Night is Still Young”), ultra-ratchet (“Feelng Myself”, “Only”), the boastful cocky stuff she loves (“Want Some More”), sentimental ballads (“Grand Piano”, “Bed of Lies”) and pretty much everything in between. With 22 tracks, several features, and all of the genre hopping, you’d think the album would be equally as messy as “Roman Reloaded”. What makes this album work? All of the songs seem to fit into a certain vibe that makes the album more cohesive. Also the fact that Nicki’s delivery is way more toned down. Instead of her high pitched rap flows and singing, she actually sounds like a grown woman instead of Minnie Mouse, so her voice isn’t as irritating and in fact it’s very pleasant.

Ultimately, what makes this album such a shocker is the fact that Nicki must have really took her time to perfect a sound for this album. Like I said earlier, the lyrics are a lot more thought out and the production is so much more intricate. It’s great because there might be hope for her, because she IS talented and she’s smart, so it’s great to know that all won’t go to waste. “Pinkprint” is no Masterpiece, but it’s a huge move in the right direction … and I might actually become a fan again.