What a great time it was watching the premiere of FOX’s new series “Empire“. Last nights hour-long premiere packed a punch, with a compelling storyline, a diverse crop of character types, and loads of potential. The premiere definitely set the viewers up for a good season with drama, humor, music and romance, pretty much everything you need to keep us entertained.

The show is created by Award winning filmmaker Lee Daniels and screenwriter Danny Strong. It focuses on Lucious Lyon (Terrence Howard), a rapper turned mogul whose Empire Entertainment company has just become a globally traded company. Everything is going great for Lucious on the surface, his career is a success but he’s hiding his health issues from everyone while setting his company up to leave a legacy once he is gone. He tells his three adult sons that his wish is that one of them will take over, and that he’ll be grooming one of them for the job. Essentially pitting them against each other, although they all don’t want the same things because they are three different people. There’s the eldest son Andre (the INCREDIBLY attractive Trai Byers), a ruthless business minded guy who is the son that wants the company the most, but scared that he won’t be in the running because he’s not involved with music like his brothers. Him and his girlfriend scheme and conspire to assure he gets the position by any means necessary. 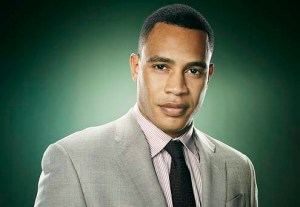 The younger sons are both artists, the middle child Jamal (Jussie Smollett) is the R&B singer and producer who happens to be gay. He doesn’t want the company, and he doesn’t even want to become a famous singer. Him and the youngest son Hakeem (Bryshere Gray) are the closest, as they collaborate on music frequently and think the idea of fighting against each other is preposterous. Hakeem is the rapper, and the spoiled one who is completely swept up in the Hip Hop lifestyle of drinking and women. Through the episode Lucious makes clear who he really wants to run the company. He has a soft spot for Hakeem, but is constantly disappointed by his immaturity. He seems to hate Jamal for being gay, something Lucious has been ashamed of ever since he was a little boy, but he clearly knows that Jamal is talented and has potential to become big. The relationship with Andre is a little unclear at this point, Lucious seems to respect him but he also seems to work him the hardest. 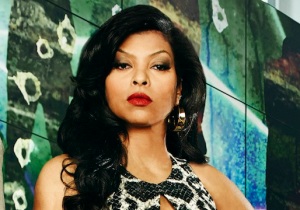 While Lucious is planning for his future, he doesn’t realize that his ex, the boys’ mother Cookie (Taraji P. Henson) is released from jail early and is coming to “get what’s mine” (wasn’t that part just hilarious, with it’s dramatic backing music – I couldn’t stop laughing). In flashbacks and conversations we find out that Cookie is the one who not only invested a big chunk of money towards Empire, but she also motivated Lucious to become a rapper in the first place. She got caught up in a drug deal gone wrong and has spent 17 years behind bard, but now she wants her cut of the company and a position as head A&R rep (a position that’s already held by Lucious’ girlfriend), and when she’s denied she goes to Andre to figure out how to get what she wants (while he’s trying to figure out how to get what he wants).

Cookie is the highlight of the show, as Taraji’s portrayal brings a great energy to the show. She’s outspoken, she’s funny, she’s ratchet, but she’s lovable and real. Obviously Henson is an amazing actress, and this role gives her a lot to bite into because Cookie is so complicated. The way the show is set up, we know that even though we like her as a viewer we also know there’s something a little untrustworthy about her. And that’s the same with pretty much every character on the show, they all have underlying conflict with someone else and they all have their motivations to do shady things.

“Empire” is great. By the end of the premiere I was definitely intrigued and couldn’t wait to get more of it. There is so much potential, and the premiere set things up really nicely for the rest of the season. There’s so many conflicts that will be delved into, so much secrecy that will reveal itself, and such a good array of characters that the show (hopefully) won’t get old for a long while. And aside from Oscar nominees Howard and Henson, the cast is great. Fellow Oscar nominee Gabourey Sidibe is Lucious’ assistant Becky and looks to provide some comic relief in the future. There’s Jamal’s boyfriend Michael (played by the adorable Rafael de la Fuente), and though he was given a pretty favorable debut I detect that he might have some ulterior motives himself. In addition to Malik Yoba, the season promises appearances from the likes of Naomi Campbell, Tasha Smith, Cuba Gooding Jr and Courtney Love.

All in all, I’m HERE for “Empire”. There are flaws, I have minor complaints (I had this feeling that it would have been less stereotypical to have Hakeem be the gay one, I got a little annoyed that Jamal was given the “sensitive/passive” traits, but I quickly got over it), but overall the show seems like it’s going to be a fun time with soap opera like drama, good music, and great acting.

So I will officially be recapping this show every week.