On Friday, Alexandra Shipp was officially cast to play the late Aaliyah in the controversial Lifetime biopic. This comes after the debacle of Zendaya Coleman and the backlash that came from her being hired for the role. The internet went crazy, mainly complaining that the girl didn’t look enough like Aaliyah (which honestly is a dumb complaint given how Diana Ross killed her performance of Billie Holliday in the classic “Lady Sings the Blues”, and she didn’t look anything like Billie), and shortly after all the complaints Coleman dropped out of the role saying “I feel like there were certain things that were missing and things that weren’t 100 percent taken care of”. Now, with Wendy Williams on board as the executive producer and fans seemingly a little more happy with Shipp in the role, the movie is a GO.

Alexandra Shipp takes on the role of Aaliyah for Lifetime biopic

The thing is, as big of fan I am of Aaliyah (knowing all the songs and the choreography. #NYG I know!) I just can’t get excited for this movie because, in all seriousness, her life wasn’t really movie material in my opinion. Sure, there’s the R. Kelly marriage and annulment when she was 15, a part of her life that will most likely be glossed over due to the fact that R. Kelly is not participating in this movie. Other than that, what!? She hooked up with Timbaland and Missy Elliott, they became good friends and with their help her career hit it’s commercial and critical peak. She got into movies, started dating Roc-A-Fella’s Damon Dash, and than unfortunately her life ended on that fatal plane crash. None of this makes for good conflict, which is essential for a good movie.

Add to all of this the fact that Aaliyah’s family does NOT want this Lifetime biopic to be made, which should be enough for any production company with the tiniest bit of integrity to pull the plug on the project (and we know by now that Wendy Williams lacks that “I” word). While the powers that be should respect the families wishes, I have to say I don’t agree with the families actual complaint that the movie should be bigger. Aaliyah’s cousin and President of her label Jomo Hankerson sent out this statement months ago,“We want a major studio release along the lines of ‘What’s Love Got to Do with It,’ the Tina Turner movie. This needs A-list actors, A-list talent that can breathe life into what we think is a phenomenal story.” And there in lies my complaint about the movie being made, Tina Turner’s life story had grit, struggle, pain and triumph. “What’s Love Got To Do With It” is such a phenomenal film because the source material is the stuff movie scripts are made of. To me, Aaliyah’s story doesn’t have half of that conflict and in turn be half of what “Love” was.

Which brings me to my feelings on the Whitney Houston biopic, also slated to be aired on the Lifetime Network. Obviously, Whitney’s life was full of ups and downs, success, drugs, marriage and divorce, and a host of other issues that would make for an excellent biopic. My complaint here is similar to Hankerson’s complaint about the Aaliyah movie, Whitney’s life was way too big to just put together a half ass TV movie. Her life deserves more than that, and it’s a shame that the director Angela Bassett and whoever is backing the project doesn’t see it. It feels like the producers are trying to cash in on Whitney’s legacy, and it also feels like this rush job of a movie began the minute she was announced dead 3 years ago. But, her life was so complex, she was so complex and such an interesting person I fear that whatever script was whipped together would be lacking in a lot of nuance and skill, and ultimately would be a disrespect to her story. 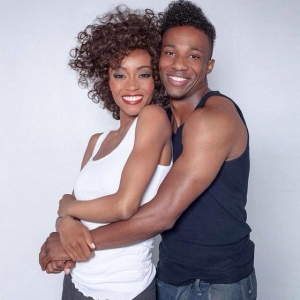 The movie is going full steam ahead no matter what though. Yaya Dacosta (from “The Butler” and “The Kids Are Alright”) is on board to play Houston, and pictures have already surfaced of her in the role. The latest news is that Whitney’s former Arista labelmate and duet partner Deborah Cox would be recording the vocals for the songs used in the movie as a Lifetime rep states “music rights and clearances are still being worked out”. I’m not opposed to Cox re-working the classic Whitney vocals, I’m actually a big fan of Cox, I just feel like this is further proof that this movie is a rush job. Seems like they could just wait until everything is in order to make the film that much better.

Which brings me to the question… Why not just be patient!? I know the Whitney movie probably got greenlit as soon as she passed away, but I have this sinking feeling that the Aaliyah movie was greenlit only after the success of VH1’s biopic of 90’s group TLC. It was reported that after that movie made such a huge splash in the ratings that networks were scrambling to find other 90’s acts to give the biopic treatment, and it’s not surprising. Most media outlets tend to not be innovative and jump on whatever is popular (or more importantly, profitable) at the time. This is almost always a bad idea.

I think if they really wanted to honor these phenomenal women, they’d take their time. Take their time fine tuning the perfect script, take their time casting talented actors and actresses to fill the roles. Take their time getting all the necessary clearances and permissions, and take their time to make it a movie the deceased Divas’ families would support. Because really, what is the rush? (We know it’s money, but other than that… why is there such urgency to get these movies out NOW?) Sure, both of these movies COULD potentially be amazing (and ofcourse I’ll be watching), but the way it looks now it seems like the films quality will match the effort and time put into making them, which is very minimal.