It’s no secret that my enthusiasm for the Grammys and other award shows has waned over the last few years. Nominees have been either very predictable or very unworthy, and instead of trying to make sense of it all I try to just ignore them. This Friday, the nominees for the 56th Annual Grammy’s were announced and it seems like the academy is trying to turn things around.  I have to admit that while scrolling through the list, I caught myself smiling and very proud of the nominees (even some of the snubs). This year seems to be a really great mix of artists with actual talent who deserve the extra Grammy shine, instead of the Academy favoring the biggest selling artists of the year just because they’re popular. Mainly, and selfishly I’m sure, what made me smile the most was that I was seeing some of my favorite music of the year up for big awards, which normally doesn’t happen.

So instead of going through the full list of nominees, let’s start with the ones that genuinely made me smile.

Daft Punk and Kendrick Lamar for Album of the Year.

“Random Access Memories” was easily one of my favorite albums of the year. I expected Daft Punk’s huge hit single “Get Lucky” to get lots of Grammy love, but didn’t expect the album to be in the Top category. Even though it is truly deserving, Grammy’s tend to relegate Electronic music to their own specific category, so I was pleased to see the album being appreciated among the rest of the great artists.

I was happy to see Kendrick Lamar up for Album of the Year category simply because I think he’s awesome. There hasn’t been a Hip Hop Album from a new, fresh, young artist like Kendrick up for this Top award in a long time, so it was nice to see and he’s definitely the one who deserves to break that pattern.
(Kendrick Lamar photo by Ben Miller, http://www.benmillerphoto.com)

Grammy’s never seem to get this category right. James Blake and Ed Sheeran are nowhere near NEW artists as Blake released his second full length album this year, and Sheeran’s “+” album has been available since 2011, and he was nominated for Song of the Year last year. The weird criteria for this category is confusing, but they are both great artists and very deserving of their nominations. And again, I just like Kendrick and he has a great shot at actually winning this prize.

The Snubbing of Justin Timberlake.

It was expected that Justin Timberlake would lead the list of nominees this year, he had the best selling album through most of the year, and is a Grammy darling. He racked up 7 total, which is great, but he didn’t find himself in any of the Top categories. His first album not to be nominated for Album of the Year. While it’s surprising, I personally feel like the snubbing is “Justified” so to speak. “The 20/20 Experience” album was hardly anything groundbreaking, and even though plenty of undeserving Albums have been nominated in this category, I’m glad at least this one didn’t get through.  I feel this is the Grammy’s trending away from giving nominations to the popular, top-selling hits and being more critical about the actual material.

Just because I love this song. It rocks!

“The Next Day“, David Bowie’s first album in 10 years, was great in that it was current but also paid tribute to the amazing career he has had. Many are complaining that the Rock categories are filled up with too many “older” acts, but I feel that both of Bowie’s nominations for Rock Album and Rock Performance are well deserved, even if he’s probably not going to win.

“Lonerism” is an amazing album, but Tame Impala are one of those groups that I think may be TOO underground to get the attention of Grammy voters. Luckily that’s not the case this year as the group get their very first Grammy nomination for Alternative Album. When I saw their name I actually did a double take before I smiled, they probably have little chance of winning but I’m happy to see them being recognized for a great piece of work.
I was also happy to see Vampire Weekend in this category, specifically because I felt “Modern Vampires of the City” should have been up for Album of the Year and I thought they might have been ignored altogether. This one nomination is fine, and knowing they have a good chance of winning it is ever better, but I feel they got snubbed in some of the bigger categories. If not Album of the Year, than “Diane Young”, one of the most fun and clever songs of the year, should have gotten Record of Song of the year.

Tamar Braxton, one of my favorite albums of 2013 earned 3 Grammy nominations

It’s no secret that I’m a bit of a #Tamartian, and I’ve been loving Tamar’s “Love and War” album since it came out. I was hoping she would be a sure thing for Contemporary R&B Album, but you can never be too sure. When I saw that she grabbed three nominations in the R&B categories I was ecstatic. Braxton is up for R&B Performance and R&B Song for “Love and War” and Contemporary R&B Album (which I personally think she should win, but who knows how that will play out).

“Without Me“, the track from Fantasia’s nominated album “Side Effects of You“, was such a banger when I first heard it, I thought it was destined to be a massive urban hit. Months later with a peak of only #26 on the R&B chart I feared the song was totally ignored, so I was glad to see this collaboration with Kelly Rowland and Missy Elliott up for an award.
(Side Note: How did “Pusher Lover Girl” by Justin Timberlake get into this race?)

Scrolling through the nominee list I was surprised when I didn’t see Kanye West listed much, so I was happy to see him get at least Rap Album (he’s also up for Rap Performance for “New Slaves”). He’s been nominated and won in this category for every single album he’s put out. He might not win, but it’s nice to see his most daring and risky album wasn’t ignored or under-appreciated because of his other antics. 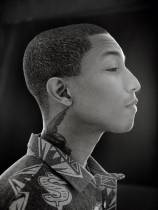 Pharrell, a front runner for Producer of the Year

Pharrell Williams for Producer of the Year.

This nomination was a bit of a no-brainer, Pharrell was responsible for two of the biggest hits this year and regained a lot of relevancy as an in-demand producer. We just have to think back to the early 2000’s when The Neptunes were making hit after hit and were continually ignored by the Grammys. Those past snubs worried me about his chances this year, but sure enough he was there and set to win this trophy.

I just recently saw the “Safe and Sound” video a few weeks ago at a bar, and it sort of blew my mind. The video is a time traveling, upbeat, fun, visually engaging video with lots of dancing that makes you laugh and makes your jaw drop. I’m very happy to see it in it’s deserved place as one of the best videos of the year.

Overall, I don’t have that many complaints which is a refreshing feeling around Grammy time. I would have loved to see Alt-J, Solange, Beach House or K Michelle among others nominated, but I wasn’t really expecting it. I was surprised that Janelle Monae and Phoenix didn’t get any nominations at all. I also thought very highly of The Strokes‘ latest album, but it, like all of their previous work, was ignored.

In the end, this years’ nominees have somewhat restored my faith in the Grammy system, and I may even do a Prediction blog post as the awards come closer. I’m most happy that my musical favorites are being recognized this year, so maybe I DO know what I’m talking about.