Months ago, I wrote about “The Summer in the Fall” and how I rarely go out to the cinemas to catch movies but end up waiting for them to be released on Blu Ray. I had a list of 7 films I was eager to see, and now they are all out. Some were worth the wait, some… to put it simply… were not. So here’s a quick run down of those 7 films, plus some other ones I happened to see since making that post, I’m ranking them by how much I enjoyed them to the ones I could barely sit through.

As you may have read, I loved this movie. Definitely exceeded expectations and was really a excellent movie that was triumphant in so many different areas… acting, writing, special effects, pacing, humor and visuals. If you haven’t seen it yet, do yourself a favor.

2. Rise of the Planet of the Apes

Heard great things about this prior to watching, and yes this movie was really a step in the right direction for Hollywood. Of course, the filmmakers had to have a human interest story at the forefront, but the movie really excels when we get the point of view of ape Caesar. I appreciate the writers for trusting that film audiences aren’t complete morons and can follow his triumphant and inspiring story. And yes, I read an article not too long ago about Andy Serkis the genius behind Gollum, King Kong and now Caesar. Serkis definitely deserves some sort of recognition from the Academy. If he wasn’t as genius in his portrayal, the whole movie would have felt flat and lacked the emotion that makes it stellar

Really wasn’t expecting much from this film. Though I enjoy nearly all the actors involved (Steve Carell, Julianne Moore, Ryan Gosling) I wasn’t sure if it would be super melodramatic, or kind of slapstick comedy or lame romantic sappiness. Luckily it wasn’t either of the three, but a rather great mixture with a very nice twist (less of a twist, more of a reveal) towards the end that brought everything altogether. Great flick, very true to life and thanks to the writing as a viewer you really liked all of the characters and wanted the best for all of them.

When I first saw this on bootleg this summer I had low expectations, just like with the original”The Hangover”. Generally with comedies and horrors, if they are raved about I generally find them to be overrated, but “The Hangover” really was better than the hype and I think the sequel did a great job at delivering. No, it’s not better than the original but it worked with the same components that made the first one so great. It has the same rhythm, and still some drop dead hilarious moments.

Very low expectations going into this one, I was a huge fan of the first “The Fast and The Furuious” over 10 years ago. After the third “Tokyo Drift” film (which wasn’t bad) I kind of lost excitement for the franchise (still haven’t seen the 4th one). However knowing all the players were back together for “Fast Five”, I knew I’d enjoy it. And what you get is some great action scenes, some nicely placed comedic moments, and one epic fight between Vin Diesel and The Rock err… Dwayne Johnson. “Fast Five” gives you everything you need from a “Fast and Furious” film, or just any good action film.

Another new addition to a franchise that I loved at first, until the third one left a sour taste in my mouth. “Scream 4” isn’t great, but it does a good job of updating the franchise to include Facebook statuses, cell phone apps and just pretty much all things “digital era”. Yet the returning stars of the franchise (Neve Campbell, Courtney Cox, David Arquette) keep the classic feel that we’ve come to expect from the series. The final reveal of the killer was just a tad bit lame, but overall it was still spooky enough and funny enough to make us forget about “Scream 3”, and it worked better than most other slasher flicks these days.

Surprise Surprise, I’m not one of the millions of Potter fanatics, but I have generally enjoy the films. They are fun, and visually stunning, but honestly the only one I have a good memory of was “Prisoner of Azkaban”, with all the rest kind of melding into one. Not being a huge fan probably is the reason I have just lukewarm feelings about the finale. Even as I’m writing this, I don’t really recall what exactly happened. There were a few bits that were pretty stunning, but overall it was just a decent film to me. I’m sure if I did a full on “Harry Potter” marathon, I’d feel more emotionally connected… as it stands, it was just good.

This movie is so over the top, with characters that are extreme caricatures and a plot that is so textbook “80’s comedy movie”, but somehow it worked. Cameron Diaz does a great job with the heartless uber-bitch role, and her nemesis Lucy Punch was good (if a little over-done) in the “good teacher” turned neurotic revenge filled chick. Justin Timberlake does a decent job of playing the dorky nice guy, and Jason Segel consistently provides laughs and balances the story a little back into reality. 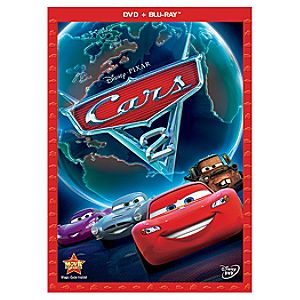 Oh Pixar!! Hopefully this film isn’t an indication of the studio going totally downhill. Sure “Cars 2” was visually stunning as always and provided some laughs. But it also felt really bogged down in trying to cater to too many different areas. The 3D aspect, being action packed, and cramming “alternative fuel” propoganda down our throats. In trying to cover all these areas, the film lacked the heart of most Pixar films which is why they are generally so good. Pixar usually keeps things simple and this one felt like it was doing just way too much, not a horrible flick (it’s bearable) but definitely a step in the wrong direction for the normally genius company.

There are silly comedies that work in surprising ways, and there are silly comedies that just come off as silly, and “Horrible Bosses” was the latter. There were some funny moments no doubt, and some of the performances were better than expected. (And I loved the little twist with Jamie Foxx’s character in the end) At the end of it though, the movie was just a little too implausible to really take seriously , luckily it provided enough laugh out loud moments, it’s just a movie you watch to escape reality and laugh, nothing to take serious at all.

After so many great reviews, and even friends recommending this to me, and being a fan of J.J. Abrams… I expected so much more from this flick. The movie was Okay, on the pro-list is that it had some great young talents who were pretty convincing in their acting, and there was a bit of suspense and mystery during the first half. On the con-list, the movie was so incredibly cliche and predictable and almost completely implausible. In the end it just felt like an homage to 80’s kid-friendly classics like “The Goonies”, “E.T.” and “Stand by Me”, but in trying to feel like those old movies it seriously lacked it’s own originality and fell completely flat by the ending.

12. Transformers: Dark of the Moon

Horrible. Honestly none of the previous “Tranformers” films have been good by any stretch of the imagination. Just decent popcorn flicks with non stop action and CGI and not much (who i am kidding)… absolutely zero substance. Sometimes they are good for some funny anecdotes, but overall they use any excuse for million dollar explosions and over the top special effects. “Dark of the Moon” was just totally stupid and not even really enjoyable (and me and my friend kept commenting on how the chicks white jacket stayed white the whole movie even with all the destruction). If you’ve seen the first two, there’s really nothing they could do special effects wise that could wow us anymore

What an incredibly cheesy movie, I don’t even want to waste too many words on this, it was just that bad. A weird mix of something that’s way too cookie cutter, way too desperate for a laugh or an intense moment, yet even with the total desperation to make this a relevant comic book movie, there’s nothing we haven’t seen before and not very memorable. Even Ryan Reynolds natural charisma couldn’t save this sorry excuse for an action flick.

(Wow, I’m done. It took me way too long to finally post this!)