What a night! The 53rd Annual Grammy Awards presented this past Sunday was actually quite entertaining, and even if it was less about handing out awards and more about performances it worked a lot better than telecasts of the past. There were some surprising high points, and some over-hyped low points but overall it was a great night for music. As far as the winners, I actually predicted a good amount of the major winners so let’s go through that now.

Even though I predicted Eminem would win (as did most people, who seem very surprised that he only got 2 wins of 10 nominations) Album of the Year, my “should win” choice Arcade Fire took home Grammy gold. And I couldn’t be more happy because of what I wrote about them possibly winning “It would be nice if the Grammy’s showed they could be ahead of the curve for once, awarding an Indie act would do that. Arcade Fire have continued to be one of the most critically acclaimed act of the Indie scene, which is quickly beginning to surface on the mainstream.”

For Record and Song of the Year I was on point with my guess that Lady Antebellum‘s “Need You Now” would sweep. “It’s really a great, simple, catchy and relatable song. It would deserve any prize it got.”

I accurately predicted both Pop Vocal Performance prizes based off Grammy voters favoritism, with Bruno Mars winning the Male prize “With 6 nominations already, it seems the Grammy voters are falling for Bruno Mars fast, so he’ll probably get this one.” and Lady GaGa winning the Female one “The Grammy voters are obviously in love with Lady GaGa so she’ll probably take it, and why not, her vocals on “Bad Romance” were some of the high points of the song.“. I was also correct with Lady GaGa’s other win for Pop Vocal Album.

One Pop category I was floored that I was incorrect in predicting. I would have bet money that Lady GaGa and Beyonce would have won Pop Collaboration for “Telephone”, but I didn’t trust my first mind when looking at the nominees. I was going to mention the calvalcade of stars that won for Herbie Hancock‘s “Imagine”, he had the help of  Jeff Beck, Pink, Seal, India.Arie as well as Konono No 1, & Oumou Sangare. A remake of a classic Beatles song with previous Grammy winners, what was I thinking not mentioning this, it’s obviously a Grammy winner just on paper.

Though it was an easy call, I got R&B Album correct which went to John Legend and The Roots for “Wake Up!” “However individually John Legend and The Roots have won a few Grammys already, teaming up looks like a winning idea.” Another easy call came from the Rap Album which went to Eminem “Eminem definitely, even though his was the lesser album of them all, with his track record there’s no way he  could lose this one this year.”

Surprisingly I got a few of the Rap categories wrong, but I was so pleased that I was correct in guessing Jay-Z and Alicia Keys‘ “Empire State of Mind” would triumph in Rap/Sung Collaboration, they also won Rap Song which made me very happy because of this comment I made “this future classic instantly captured the hearts of people in every city and became Jay’s biggest hit and first #1 single.” Still I was off with Rap Solo Performance, awarded to Eminem’s “Not Afraid”. Nicki Minaj didn’t get Grammy gold as I predicted for Rap Duo or Group Performance, Jay-Z also grabbed that one for “On To The Next One” (which… I mean I’m happy he won, but Swizz Beatz hype-man status on the song doesn’t seem to qualify for Group performance to me).

Even though Arcade Fire won the Album of the Year prize, that didn’t translate to any wins in their category of Alternative Album which surprisingly went to The Black Keys, the duo also won for Rock Performance Duo or Group. Both of those awards I predicted Arcade Fire would win, but I did say if Kings of Leon didn’t win the latter award it “would leave the race open to the Black Keys, Arcade Fire and Muse… The Black Keys’ song was an underground and commercial favorite“.

I think everybody was shocked at Esperanza Spalding winning for Best New Artist, I was happy to see her name since I’ve been somewhat familiar with her for the past year or so. I was surprised she was even nominated, and I was sure the prize would go to Mumford & Sons. I figured Drake or Justin Bieber were the back up winners but I never though Esperanza, a little-known Jazz artist, would pull the upset. I’m really happy she did though, I like hard-working artists who aren’t in the mainstream picking up top prizes.

Overall, I felt like most of the winners were well-deserved. As I mentioned before Arcade Fire winning the top prize of Album of the Year looks good for the Grammy’s, showing you don’t have to have massive album sales or media attention to win awards. I think the winner I was most happy with was Danger Mouse finally winning Producer of the Year. His output the previous year wasn’t as high a volume as the other nominees, but obviously voters recognize his genius.

I was also really pleased with the telecast. In typical award fashion, it went a little over-long, but overall some really great and diverse performances took place. Going into the show, the most buzzed about performances were that of Mick Jagger taking the Grammy stage for the first time to tribute Solomon Burke , Barbara Streisand‘s (pretty boring) performance of “Evergreen” and ofcourse Lady GaGa’s performance, debuting her new record-breaking single “Born This Way”.

Though she sounded great and showed loads of energy during the performance, her red carpet entrance in an Egg was actually more exciting, creative and unique. Katy Perry did an impressive job doing “Not Like The Movies” and “Teenage Dream”. She’s not known for her voice, but she sounded great during both numbers and even her stage presence took a step up. Rihanna and Drake’s performance of “What’s My Name?” was a little unnecessary (she wasn’t nominated for the song) but she’s showing some improvement in her live performances, and she danced alot which isn’t typically what she’s famous for on stage. 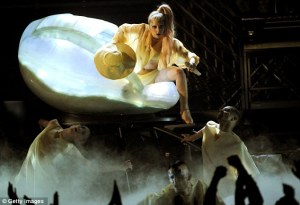 Arcade Fire’s second performance, “Ready to Start”, was much better than their first seizure inducing rendition of “Month of May”. Lady Antebellum, Muse, Avett Brothers and Miranda Lambert were all passable. Justin Bieber’s performance was a little over the top and when Jaden Smith joined him it felt like The Kid’s Choice Awards and not the most respected Music awards show, and Usher should just lipsync any future performance of “OMG” because with the choreography it’s obvious he can’t sing at the same time. And when Eminem, Rihanna, Adam Levine and Dr. Dre all took the stage, it was newcomer Skylar Grey who stole the performance by just singing the hook of Dre’s new hit “I Need a Doctor”.

And ofcourse there was the mess of a Aretha Franklin tribute with chronic over-singers Christina Aguilera and Jennifer Hudson, along with Yolanda Adams, Martina McBride and Florence Welch of Florence & The Machine. You kind of knew what to expect here, but I think the biggest problem was the ladies voices were not compatible at all. And Florence Welch and Martina McBride really seemed out of place, not great, but somehow better than the Michael Jackson tribute last year which was just painfully boring.

Here are my Top 5 performances of the evening.

1. Mumford & Sons “The Cave”. They were just the first part of a trio of performances followed by The Avett Brothers and Legend Bob Dylan. However their short time on the stage was easily the most exciting during the whole show. They sounded great, the song was good, their band was in perfect sync with each other. The best thing about it was they, moreso than any other performer, actually seemed really excited to be performing there. You could feel so much love coming from their performance.

2. B.o.B., Bruno Mars & Janelle Monae “Nothin’ On You/Grenade/Cold War”. The newbies of the evening really showed why they deserved to be there. B.o.B. started with a beautifully stripped down version of “Nothin’ on You” with Bruno and Janelle providing wonderful backing harmonies. Bruno Mars was full of confidence with his Doo-Wop version of his recent hit “Grenade”. Though he was pitchy towards the end, overall his performance showed great promise. And with “Cold War” Janelle Monae rocked the house, hopefully that performance will get her the exposure she deserves.

3. Cee-Lo Green “Forget You”. Not exactly sure why Gwyneth Paltrow was chosen as his duet partner here, but his whole performance was just a great show. His over the top feathered outfit, the Muppet band and the Muppet back up singers and their choreographed steps. And even though I’m still perplexed, Gwyneth sounded really good just lacking in stage presence.

4. Mick Jagger “Everybody Needs Somebody to Love”. Hard to believe, but this is his first ever Grammy performance, and he chose to use his debut appearance to tribute one of his inspirations Solomon Burke. If you’re a Stones fan you realize they started out all those years ago playing the early Blues and Rock and Roll sounds they loved and he seemed like a little kid on stage just enjoying singing probably one of his all time favorite songs. I didn’t quite understand why he kept pushing Raphael Saadiq around on stage (was he mad he was trying to hog some spotlight, or is this some kind of Blues thing I just don’t get), but it was an impressive performance.

5. Katy Perry “Not Like the Movies/Teenage Dream”. This is a performance that won’t really be remembered, as it wasn’t anything too groundbreaking or new. She just sounded great, she stepped up her game a lot for The Grammys. And the wedding footage is also adorable.