“Amadeus” is without a doubt one of the Best Films ever made, it’s easily one of my favorite films of all time… and I’m talking Top 20.

I bought the Blu-Ray about a month ago, and I have literally watched it about 7 times in the past few weeks. With the expert screenwriting, Award winning acting and genius direction the movie is just Ace in all areas. Funny, because certain qualities about the movie should have been a disaster. At times Director Milos Forman‘s adaptation of the Broadway show of the same name feels designed for the contemporary market of the early 80’s. For example, most of the main actors are American instead of hiring Italian and German actors for authenticity’s sake. Also the actors aren’t forced to don fake accents, they just vary their American accents to represent the common folks of the time and the more regal Royal ones.

Strangely though, putting the story in contemporary terms works beautifully in so many different ways. For one it makes the dialogue more understandable without having to completely dumb down the content. And because the film was released in the time of Sting, David Bowie and Prince viewers could easily relate to Mozart being a Rock Star of his time. Plus the winning combination of great writing, directing, acting along with the art direction and costume design really bring this 18th century world to life and puts the viewer right there. Instead of it seeming like a stuffy, boring time period it really does feel alive and real, and it’s rare in film that this time period can be viewed in such a relate-able way.

Those who have yet to see this Masterpiece might be staying away thinking it will be just another boring and long bio-pic, but it really isn’t. Lots of information about the lives of main characters Mozart and Salieri are divulged, but it’s not a movie about the rise of Mozart or Salieri but more about their relationship over the few years covered in the film. Opening with a long confession from an older Salieri, whose confined to a mental institution. He tells of the day that “changed his life” to a priest, that being the day he met Mozart in Vienna. Salieri’s admiration for Mozart quickly turns into an obsessive jealousy when the mature disciplined man finds the popular musical genius is just a goofy immature kid. The two have several run-in’s from than on while working for Emperor Joseph (played by every-man of the 80’s Jeffrey Jones) which further fuels Salieri’s resentment towards Mozart and makes him lose faith in religion. He feels God punished him with mediocrity and blessed an unworthy Mozart with the talent he should have received.

Throughout several beautiful musical performances, Salieri tries his best to take Mozart down. Whether it be sabotaging future work opportunities, trying to manipulate his wife Constanze (played by Elizabeth Berridge) in sleazy ways, to his final attempt at disguising himself to commission a “Death March” from Mozart which ultimately brings the un-doing of both composers.

The film is expertly constructed, it moves at a great pace and it delivers both intense drama and some light funny notes, and most of all some amazing musical sequences. The acting by the entire cast is phenomenal, of course Academy Award winner F. Murray Abraham‘s portrayal of Salieri both young and old steal the show. He’s such a heartless villain throughout most of it, but his human vulnerability and insecurities make him easy to relate to. Jealousy is something that consumes all of us at various degrees, so you relate with him when he says outlandish things like an Emperors yawn at a Mozart show was his own “victory”.

And in total contrast to Abraham’s sinister performance, Tom Hulce gives a wonderfully light-hearted and comical performance of Mozart, making the audience completely side with him and his fun nature. Yet, Hulce shows major versatility in making Mozart’s passion for music really clear to the viewers. The heart of the movie is the dramatic contrast between the two main characters, and they both play it perfectly and really sell the dynamics between the two, who both admire each others work, but Salieri’s jealousy gets the best of him and is all he can think about. While Mozart’s misunderstood genius eventually gets the best of him in a fatal way.

One of the main reasons I love this film is the music, I’m always a fan of films that incorporate a lot of music but this film truly makes music and composition a third character. From Salieri’s vivid and precise description of Mozart’s work, to the Forman’s groundbreaking way of getting inside Mozart’s head (with the viewer hearing what he might have heard in his mind while composing his brilliant operas), the film details the music making process in a way never duplicated since. Classical music has never been a favorite of mine, but this film really made me understand it a lot better.

And nothing is better than the climax, when Salieri offers to dictate Mozart’s “Requiem” while he is sick and bed-ridden. Mozart passionately composing the score in his head and trying to get his thoughts across, and Salieri desperately trying to understand (and keep up with Mozart’s rapid paced mind) but also secretly enjoying being  a part of something so amazing and new. The scene is so beautiful, so unique, so moving and intense, it’s easily one of my favorite scenes of all-time. 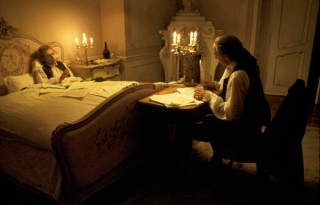 While watching “Amadeus” I did question the historical accuracy of it all, did things really happen the way they did in the film in the same chronological order? Thankfully there are several online resources to confirm that No, this movie isn’t 100% accurate but as Peter Shaffer (the screen writer and writer of the original play it was based off) puts it “there is a kernel of truth in everything”. And if you think about it, the movie would have been very un-interesting if there wasn’t the dramatic pace and conflicts presented in Shaffer’s script.

Basically, if you haven’t watched this film… do so. And if you have seen it, see it again. If it’s 8 Academy Awards including Best Picture aren’t proof enough that this is one of the most excellent films in History, than see for yourself how everything that could have gone so wrong, ends up being so incredibly right.