In 1983, Prince did something he hadn’t done his whole career and wouldn’t do for another 10 years. He actually took a break! From his debut in 1978 up until his Masterpiece “1999” in 1982, Prince released an album every year. Of course we know now that he took 1983 off to film his first starring role in the future classic film “Purple Rain. The year off also gave a chance for the calm before the storm, because 1984 would be his biggest year ever, the year that would make him a World Wide Star and pop culture Icon. The albums following the immense success of “Purple Rain” would be a strange journey, but a fun and always changing journey.

So to continued what I started ages ago,  here are the next 3 years in Prince’s ever evolving Discography.

If you don’t know anything about Prince, you know of “Purple Rain“. The Academy Award winning summer blockbuster of 1984, and the accompanying album of the same name which spent 24 weeks at #1. This is definitely his most Iconic album in his Discography, and possibly the most overexposed because of it’s success. As a fan, the popularity of the album may affect feelings about the album overall, but it can’t be denied that the soundtrack packs some amazing music. The great thing is it doesn’t stray too far from his edgy prior work, keeping the sound still very much an experimental and genre-bending like the music he got famous for. The difference is it’s definitely a bigger sound, with more anthemic tracks for the film. It’s a bit more polished than his earlier work, but it still maintains a bit of the underground edge that made him stand out from the rest of the Pop crew of the time.
The album did give Prince some of his biggest pop hits in “When Doves Cry” and “Let’s Go Crazy”, and those are two great examples to show he could stick to his guns and write something introspective and emotional (“Doves”), and still make it something that millions would respect and relate to. Throughout the album Prince, and his band The Revolution continually surprise the listeners going from R&B ballads in “The Beautiful Ones”, to New Wave Rock hybrid in “Computer Blue” than onto more energetic Dance funk (“Baby I’m A Star”), Pop (“Take Me With U”), with the Epic title track being almost the definition of a Rock ballad. “Purple Rain” is a great representation of who he was as an artist for the bandwagon fans who bought the album because of the film or the popularity he achieved that year. This album made the world really appreciate Prince’s unique gifts. 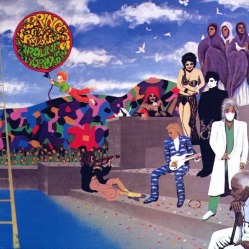 Following his most successful era yet, Prince seemed to want to get away from that sort of fame with 1985’s “Around the World In A Day“. Not only was there purposely very little promotion surrounding the albums release, but the whole theme of the album seems to deal with him and The Revolution wanting to escape in so many ways. Going “Around the World” is a way to escape conceptually, and musically the album does escape a bit from his usual. Not to say this album is drastically different from his other work, there is definitely a stamp of the Prince sound imprinted here. There’s diversity, great lyricism and wordplay, and some great vocal techniques. However, from the albums beautiful artwork to it’s music there is a psychedelic and worldly influence on every track. And while there are some really great stand out tracks here, something about the album just feels off.

For one it doesn’t feel as cohesive as the other albums, when the album shifts from Introspective slow numbers to Pop to Funk to Rock… it just doesn’t flow quite as well as it did even on the prior album. And than not every song can stand on it’s own, as songs like “America” and “Condition of the Heart” (while nice songs) are almost pure filler. Of course the negative points of this album are more than made up for with the positive points. “Pop Life”, about valuing who and where you are in life, is arguably one of Prince’s best written songs. The sexy “Tamborine” is one of his funkiest, “Raspberry Beret” is one of his most catchy and fun singles and even “Paisley Park” stands out with it’s storytelling stance and Prince’s vocal delivery.
“Around the World In a Day” is nowhere near a Bad album, it’s just a hard read and doesn’t quite work as well as a whole as his early classics.

Just like in the (crap!) film and Prince’s directorial debut “Under the Cherry Moon”, the accompanying album “Parade” is steeped in Parisian influences. Thankfully the album works infinitely better than the movie by being really funky and utilizing some really great production while Prince vocally is doing things he hadn’t done at that point. And on top of The Revolution sounding more harmonious than ever before, Prince adds more instrumentation, orchestration and even some elements of Jazz to make the overall feel very lush and full. Tonally, Prince had something in mind and it sounds like he executed every bit of that sound. Which, for me, lies the problem. Nearly everything here has a similar sound, not saying that each song is a carbon copy of the former, but it’s a lot less energetic and diverse thus making it a clear departure from his earlier work.  Besides the funk cuts, there isn’t a definable sound for the bulk of the album, and that’s basically Prince trying to form a whole new genre and sound which has to be applauded. When you get songs like “Girls and Boys”, “Mountains”, “Under the Cherry Moon”, “Anotherloverholenyourhead” and one of Prince’s signature mega-hits “Kiss” it’s really hard to complain about the album. Even the shorter “interlude” like songs “I Wonder U” and “Life Can Be So Nice” are more than stellar. “Parade” is simply just Prince’s biggest departure from his signature sound, and feels a little different. Still a great album, but as a Prince fan it just feels like something is missing.

And than, in 1987, Prince released another Masterpiece. After veering a off the path a little and trying new things with his last two efforts, Prince managed to recapture his strengths and what made him who he is as an artist. The double album “Sign O the Times” delivers on so many different levels and is easily his second best album to date (and on any give day, maybe his best!). The sound is really underground and especially grungy on certain tracks (“It” and “The Cross” come to mind) recalling the tone of “Dirty Mind”. This album maintains the edginess of that Prince, but 6 years later he displays much more maturity and and even better grasp of his musical talents.

What may be the most striking thing about the album is his lyrics. He includes plenty of his standard wordplay and double entendre’s on “The Ballad  of Dorothy Parker” and “Starfish and Coffee” and hit single “U Got The Look”. What stands out the most though is how intensely sincere and personal he gets on more of the stand out and classic tracks “Adore” “The Cross” “If I Was Your Girlfriend” and “Forever In My Life”.  Which is part of the reason this album is one of his best, Prince seemed to become a down to earth musical genius.

All the messages and concepts on this album, ranging from truly sentimental love songs to just fun jam sessions, are things every person could relate to. At the same time being a more humbled human effort, the production and musical direction on every track seems a bit super human. The extended jam session of the 9 minute opus “It’s Gonna Be a Beautiful Night”, the extended break down on the upbeat “I Could Never Take The Place of Your Man”. Even the stark and gritty arrangement of the title track show just how much he’d grown in the now 9 years in the business.

So after traveling “Around the World In a Day” and after playing a Parisian gigolo for “Parade”, Prince finally returned to what made us love him the most. His raw energy, his unapologetic experimentation, unfiltered emotional vocals and just insane musical genius. The diversity and versatility of his sound, his ability to switch concepts up on a dime and still make it work, it’s all there. A really triumphant return to form and easily one of his Top 2 (that settles it! *laugh) Albums of All Time.

Rating: 5 stars
Best: If I Was Your Girlfriend, Forever In My Life, I Could Never Take The Place of Your Man